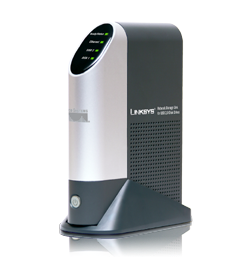 I bought a Linksys NSLU2 a while back, which is a low cost (about $99) appliance for turning two USB disk drives into a Network Attached Share (NAS) system. This lets me set up file storage centrally located on my LAN (as opposed to attaching it to one computer on the LAN and setting up a share).

What's inside is a small Linux computer mounted on a single circuitboard. And that's where the fun comes in. As the device's Wikipedia page points out, since the internal Linux is licensed with a GNU General Public License, Linksys was required to release their source code. This has enabled third parties to develop firmware upgrades to the device. One popular upgrade is the Unlung SlugOS, which among various things, enables the device to accept telnet connections.

Here is my n

etwork cabinet at home. From left is my DSL modem, a 360 GB USB disk drive, the NSLU2, and my Linksys WRT54G Wireless router. If you know this router, you can see by the size that the NSLU2 is not much bigger than a deck of cards.

Upgrading to the Unslung firmware went exactly as the directions described it. After restarting, the NSLU2's admin page had a few additions, as you can see in the screen grab below. It added an unslung logo on the upper left, and a "Manage Telnet" link on the right. Once I enabled telnet I was able to log in and get a prompt by telnetting to 192.168.1.77.

A short tour of what is inside the box is shown in the telnet session below. There's cool stuff inside! A nice handful of basic unix commands, the web server that serves up the admin site (above), and even a wget command (which I demonstrate by getting the yahoo.com homepage HTML.

The next thing I wanted to do is to "de-underclock" the device. The CPU is 266 mHz but for unknown reasons, Linksys clocked it down by half with a tiny little resistor. Here's the board:
Simply removing the resis

tor clocks it up to 266 mHz. Following the helpful instructions on the Unslung site, I geared myself up with some needle nose pliers, a static wrist guard and gloves, a magnifying glass and a geeky miner's light (see pic at left). All I had to do was get a grip on that tiny, tiny resistor (about 1/4 the size of a grain of rice)...and I crunched it! After all, I wasn't going to need it again.

When I put the card back inside the case, reconnected it and restarted it...it worked! And I got the proof the the clock speed doubled in my telnet session:

Here are highlights of what was announced for the iPhone OS 3.0 release early this afternoon from Apple:
at March 17, 2009 1 comment:

Our local Java User's Group chapter, CJUG recently hosted a presentation by Rakesh Vidyadharan titled iPhone SDK: Java Developers Perspective (link to PDF). It wasn't so much an immersion in iPhone development per se, but an introduction to development in Objective C.

Some of the things I found interesting:

I read an article today called How to lose Twitter followers in 10 steps. I've probably read about 20 such Twitter Ettiquette articles, and most are pretty good. They don't even all say the same things, which means there are many, many ways to be an obnoxious Twit. Twitterer. Ahem.

And yet there are still more ways to lose followers, because they have yet to cover MY list. Here are things you can do to get me to stop following you:
Read on Twitter today from someone at SXSW: "Everyone starts out on the internet as a douchebag. Then you do something to move above or below that line."
at March 13, 2009 No comments: