Karl Rove and former Attorney General Alberto Gonzales found to be involved in a cover up of the U.S. attorney firings by the Senate Judiciary Committee? 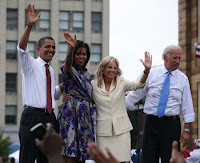 We let her run around the kitchen with the digital camera, and she took these shots. Keep in mind that she composed each shot by looking at it on the digital display before snapping it. (Except for the self-portrait, of course.)

As you can see, she likes closeups. Now is that just a kid being silly, or does it somehow reflect a child's view of her world?
at November 19, 2008 No comments:

'Rachel Getting Married' perfect...not in a good way

What Babbette's Feast did for dinner parties, Rachel Getting Married now does for music at weddings.

My friend Andrew, who earns part of his living playing classical string music for weddings, will now be getting all sorts of odd requests he won't be able to meet.

"We'd like a quartet consisting of lute, guitar, ethnic percussion and violin. They will play at each of our meals, the rehearsal dinner, the wedding and the wedding banquet. We want them there the entire weekend, from the first morning as the overnight guests trickle in, to the morning after the wedding while they are leaving. They should be sitting around everywhere, noodling around, tuning up, improvising, and never taking a break unless told to shut up. At the wedding banquet they have to morph into a backup band for an annoying folk-roots singer.

We also want a 'White Stripes' style guitar-and-drums duo that will play really loud, but far away across the lawn, so they don't hurt our ears. They need to be content with not playing any actual rock music, but standards such as the Wedding March in Hendrix-playing-the-National-Anthem-at-Woodstock style.

All the other musicians, however, will be playing in extremely cramped spaces like tiny dining rooms and small tents. But don't worry, this will not be your ordinary gig. Everyone is really going to have a good time. All at the same time, all the time. They will all sway together and sing. Nobody, not even the groom's family and guests who haven't met anyone before, will be withdrawing into a contemplative mood, or feel shy or disconnected to the group mood. Well, there might be one person in whom we'll concentrate all the types of dissatisfaction that someone at a wedding might experience. Because that would make a good story.

By the wedding banquet, it should seem to our guests like we've already reached our peak, but wait until the wild nighttime bachannale we'll have in a very cramped tent, with a soul band with five brass players and hot Brazilian dancers direct from Carnival de Rio. Can you supply that? By the way, the wedding is in Connecticut.

Bear in mind that our wedding party is extremely multi-cultural. The band should match this demographic, or if you can't do that, achieve it with outlandish costumes.

We're really looking forward to this!"

It wasn't like a celebration after a Bulls victory or a Pistons victory in Detroit.

It wasn't like a Taste of Chicago or a Blues Fest.

It didn't lure hooligans or Obama-haters looking for trouble. They weren't in the neighborhoods either.

It wasn't a "complete mess" or any of the things some people said it would be. It was a gathering whose core was made of people deeply involved in the outcome of the election.

What it was, was an evening of watching CNN on a Jumbotron and then hearing McCain's concession and Obama's victory speech. And then it was time to go home. The Chicago Tribune has a time lapse photography video of the entire event in 3 minutes.

There were two high points for me. First, when at 10pm CDT, CNN announced a projected Obama win from Virginia, immediately followed by their projection of Obama winning the Presidency. The jubilation of that moment is something I will never forget. Next, and this is a funny one, was seeing Biden come out with that smile and his sky-blue tie. I like that guy.

The Chicago Tribune caught a pic of me in the crowd at one of the moments of jubilation. (It's pic #56 of this slideshow.)

The appearance of Obama himself was a bit anti-climactic. His energy level was not like the best we've seen from him, and his speech was more humility than jubilation. I was prepared for this by watching one of his campaign speeches earlier that day on the internet, where it seemed that fatigue from the final push was starting to get to him. Also, I already sensed a Barack Obama changed by his new responsibility. He knows his words aren't just for the purpose of bathing supporters and Democratic faithful in a warm glow. He's now on a higher plane, talking to all of America, the Congress and Senate, the World.

The majority demographic there seemed to be post-college people in mid to late 20's. One reporter described them as "poly-sci nerds." Plenty of people in their 30's, 40's and 50's too though.

There were a few negatives. The Chicago Tribune advised us to bring stuff to eat, but both our water and snacks were confiscated at one of the checkpoints. What's up, Tribune? The second is the standing and the waiting, which comes with the territory of course, but always requires some endurance. The third was the lack of cellphone signal (which everyone warned would be the case) so I couldn't do the Twittering I was hoping to do.

As previously announced, there was no live music (save for a solo singing of the National Anthem), but the choice of recorded music was very nice. Good mix of rock, blues, soul, funk and country, quality songs, but with none of the pieces being tired, worn-out overexposed classics. The African-American artist who sang the National Anthem sang in "the key of soul," but it wasn't one of those over-the-top, love-to-hear-my-voice Whitney-Houston kinds of renditions. The music that followed the Obama speech was of the same cinematic-sounding orchestral variety that was played after Obama's acceptance speech in Denver: a bit manipulative, yes, but not nearly as clicheic as actual movie music and not transparently patriotic sounding. I have good feelings about the music that will be associated with this Presidency.

For the walk back to our train, we were corralled by the police to go west on Jackson (although I needed to go north on Wabash). There the crowd really let some energy loose, whooping and hollering, where the echo from the canyon of skyscrapers was deafening.

Today, I can't find a copy of the Chicago Tribune or the New York Times...they were all bought up before 9am!

Congratulations to President-elect Obama and all his supporters!
at November 04, 2008 No comments:

For my friends outside of Chicago, you may or may not know that Barack Obama's campaign has organized an Election Night rally on the lakefront in Chicago. If Barack wins, this may be the most televised event of the evening, and the likely location of his acceptance speech.

If you're watching TV that night scan the crowd for me, since as you can see, I was able to get a ticket! (Sorry, I've blurred the bar code, so you can't make a counterfit.) There was a less than 24-hour window before they all got snapped up, but all you had to do was fill out a form on a website. To get a feel for how hot an item this ticket is, see these Craig's List ads, and these items on eBay.

If you use Twitter, follow 'gregsandell' and I will try to make updates throughout the evening. I think you can also read my Twitters from my facebook page.
at November 03, 2008 No comments: