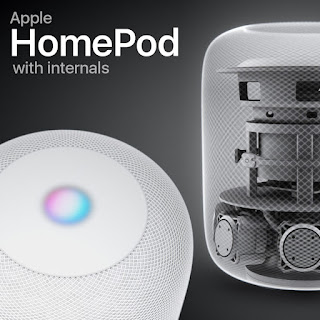 When you try the new HomePod at the Apple Store, you're only allowed to do generic things with it because the floor model is configured to disallow a connection from your iPhone.  This product costs $349, by the way.  But you can always try it out by buying one and returning it in the 14-day period.  Apple is there to help!

Admittedly I'm not exactly the target consumer Apple has in mind or the HomePod.  I don't wish I had an Alexa-like device around the house.  I never became a fan of using Siri commands on my iPhone.  I don't need Apple Music to be the source of music I listen to, and I already know that my eclectic music tastes are not well catered to by Apple Music's holdings.

But Apple always makes smart products, right?  When Steve Jobs presented the iPhone, he described it as a phone, an iPod, and an internet browser in one device.  Apple could have bait-and-switched us by providing some poor excuse for a phone, short on features and long on predictability.  No, Apple gave us a phone that was all they things we expect from a phone, plus more, with creative twists, and they changed the world.  So I should expect HomePod to charm the pants off of me and do a better job than some of the devices I already have around the house, like bluetooth speakers, and serve up my music with interactive voice commands.  I was quite intrigued by the potential for great sound by the extraordinary audio hardware inside:  seven beamforming tweeters and a high-excursion woofer.

So yes, it does fill the role of a bluetooth speaker.  I can play the songs that are physically on my iPhone from the Music app.  The quality is very good, it does fill the room with sound nicely.  But those charming, unexpected features that can change my life?  They aren't there.  In fact, HomePod is astonishingly not good at all the things you'd like it to be.

But I'll play nice, and start by listing what HomePad IS good at.


A few interesting or odd things:
So I don't know why you'd want a HomePod.  Apple seems to have made a product that's meant for asking very generic things with simple words, and a gateway to the mainstream music to be found in Apple Music.  My advice?  Stick with your bluetooth speakers, and the for better quality, pay more.

Here's a sorry list of the many things I tried to get Siri to do with my HomePod.